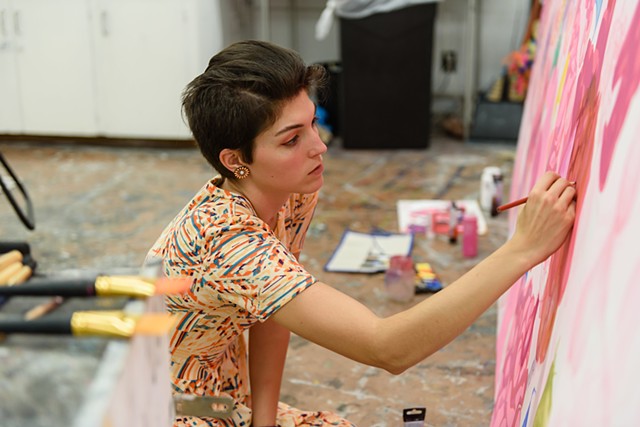 Annamarie Williams-Buchanan received her MFA from Clemson University in South Carolina in 2019 with an emphasis in drawing. Buchanan is a visual artist that uses drawing and mixed media to explore empathic and spacial relationships with the abject body, particularly the feminine body. She realized the need to spark conversation about such social injustices after being a house manager for a women’s resource center; after that, Buchanan began working closely with local women’s aid shelters. The cathartic process that art has to offer is present in the process of Buchanan’s work and she hopes to bring that catharsis to others. She realized a need to revamp art programs in her community and in 2016 developed an arts outreach organization called Arts2Grow on her college campus. Arts2Grow reached out to local Girl Scout Troops, Masonic Homes and partnered with the Alma Community Arts Center in an effort to revitalize art within the area. Through art and activism, Buchanan hopes to get people thinking about the ways they themselves can make an impact in their own communities. Her work has been in several publications including See Spot Run, Pine River Anthology, LUMINA and Paper Darts. She has also exhibited her work at Kai Lin Gallery, Fe Gallery, Flora Kirsch Beck Gallery and Clemson University.